It was a dark and stormy night last night… for reals. Our horrible heat wave finally broke violently, as a nasty storm front blew threw. Just as dusk was falling, we were out picking up some carry-out for dinner and heard there was a tornado warning in effect. Now, we live in central Jersey for a lot of reasons, and lack of tornadoes is right near the top of my list. I do not cope well with adverse weather conditions, and so I was in a state of great freaked-out-ness when we got home. The sky was greenish, and there was an almost constant barrage of thunder and lightning. The trees were tossing unhappily, and huge, fat raindrops sounded like rocks hitting the windows.

And then, as I was nervously standing at the sink in the kitchen, getting ready to lay out our spread of Chinese food, I heard it. The unmistakable “CRACK!” overhead. And just like that, in a surprisingly gentle swoop, the entire picture window filled with maple leaves.

There was all manner of consternation as we slowly came to realize that an enormous branch had, in fact, just fallen on our deck, missing the kitchen by mere inches. Boomer bravely stepped outside to give it a sense of perspective: 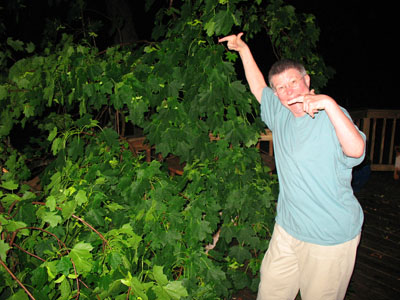 Rumors started to fly around the house that our beloved maple was in ruins, and that it had taken the dogwood out with it. Through the darkness, all we could see was a single angry bit of broken branch, and to add insult to injury, the storm completely abated pretty much immediately. It all amounted to a spitting of rain and a single gust of wind strong enough to break our favorite tree.

When morning rolled around, though, the tension was relieved, as we discovered it looked like a mess…

… but it really wasn’t that bad. The dogwood was unharmed, and the leafy canopy? Is still pretty leafy.

By 2:00 in the afternoon, all that was left of the whole affair was our memories and photographs.

Years from now we’ll be able to look back on this and laugh. Actually, if I hadn’t written this blog post, years from now we’d probably have turned this into the most ridiculous “big fish” story every. “And then there was that time the maple was cleaved in two by the wind, and an entire half of it fell on the house, shattering windows and nearly killing us all…” So, yeah. This… wasn’t that big a deal. But it’s more excitement than I think we need on a regular basis.

Filed under Stately IPB Manor, The Trees Of Maple Hoo

IPB Manor Finally Does Something Right

We have a nosy across-the-street neighbor who loves nothing more than telling us all the things we’re doing wrong with our house and yard. And in the unlikely event that she can’t think of anything unkind to say about our home maintenance and upkeep (always under the guise of trying to be “helpful”, mind you), she will then move on to pointing out the flaws of all the houses and yards around us. We know first-hand that our front-yard raised-bed vegetable garden is an endless source of consternation for her, so imagine our surprise when, after we put up our simple holiday wreaths, she enthused to Boomer that our decorating touch was gorgeous, and that we “simply must put them up again like this next year.” Color us shocked! Of course, they do look awfully nice, if we do say so ourselves.