Being a hockey blogger has put a giant spoke in the wheel of my stitching progress. In prior years I’ve finished dozens of projects in no time, earning me the nickname “Threads of Fire”. Not so much anymore. All that game diarizing over at IPB means no stitching time, and no stitching time means I’ve completed something like three or four small pieces between this time last year and now. However, the instant the hockey season ended, my stitching mojo came back in full force; a hockey season’s worth of Threads of Fire burst to the surface. I finished “1824” and then started in on “The Shores of Hawk Run Hollow” (because finishing one piece means you’ve earned the right to start something new, even though you have 8,000 UFO’s [unfinished objects] in the basement stash). “The Shores”, or “MFB By The Sea” was going swimmingly — see what I did there? — but… Well, I feel in love with a different piece, “The Villages of Hawk Run Hollow”, designed by Carriage House Sampings. I had been underwhelmed by it when it was first published, but the more I looked at it, the more I found it irresistible. The graveyard! The apple orchard! The blacksmith! It’s all so wonderfully detailed, and the colors are so fabulously Autumnal. The fact that KtG came for a visit when my resolve to keep working on “MFB By The Sea” was at its weakest didn’t help — if you ever need to be talked into starting a new project, KtG is your gal!

On June 28th, 2008, I started “Village of Hawk Run Hollow”. (Sadly, that title doesn’t lend itself to an obvious “MFB-ification”.) 5 weeks later, I’ve decided to start taking pictures of the piece in progress. In those five weeks of stitching on average about three hours a night, I’ve completed one and a third of 12 squares. Not bad! Of course, I know that when the hockey season starts up again, I’ll be down to averaging about six hours a week, so I don’t imagine having this done for another…oh say… three years! (And that’s assuming I don’t get talked into starting something new between now and then, which is highly unlikely since I’m planning a stash-renewal trip to the Attic in August.) I’m hoping to take In Progress pictures every Sunday to see how things are buzzing along.

One and a Third Squares Finished!

Still A Loooooong Way To Go

I am a little obsessed with how the backs of my pieces look, but once they get framed, I can’t ever see the back again. This picture is so I can revisit the back of this one long after it’s framed. Assuming it ever gets finished…

My Favorite Detail of The First Finished Square

The fun in this piece is in the details. My favorite part of the first square I finished (technically, the third square of the piece) is the stone foundation of City Hall. I though it would be a pain to stitch, but it zipped right along! I worked on this square while watching MacGyver, which taught me one thing — MacGyver was not designed for people who were going to be stitching while watching. There were so many instances of “action” where there was no indication whatsoever what was happening if you were only listening. I needed Doc Emrick to be calling play-by-play for Mac’s big action scenes!

Rollie adores sleeping on my lap with piece of linen draped over her. These giant “Hawk Run Hollow” pieces are her absolute favorite, since there’s a lot of linen for draping! I figure having a few (okay, a lot) cat hairs (aka “threads of love”) stuck in linen is worth having a happy, purring cat in my lap. 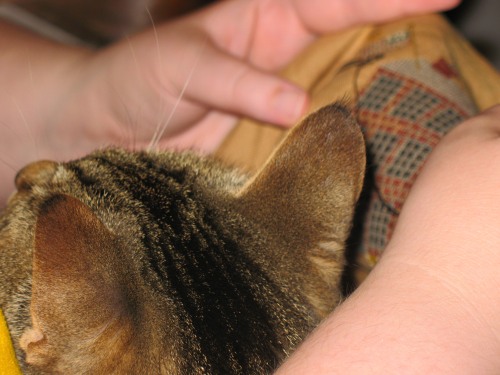 20 responses to “Stitching In Progress: Villages of Hawk Run Hollow”